Dostojewskij as an ethnographer of his time

"I wish I had the positive characteristic of being a 'Faulpelz' (engl: lazy-bones)" - I just like the German expression, it sounds so decadent. (Dostoevskij and Geier, 2013, p.20) Fjodor Dostojewskij wrote in 'Notes from the underground' about a man who isolates himself from the bourgeois world. This short existentialist book reads like an autoethnographic record of the time, Dostojewskij was living in. Of course, autoethnography did not exist back then as a category or method. It developed in the end of the twentieth centuries when existing epistemological and ontological approaches were increasingly questioned and challenged by 'old-school' ethnographers. (Ellis, 2011, p.2).

For many, Dostojewski clearly is categorized not as an ethnographer but ahistorically he turns out to be quite a good observer. With a note at the beginning, he even emphasizes the relation of his writings to the social realm. He states that although the notes from the underground are fiction it is certain that human-beings like the protagonist exist in real life and that at some point one encounters them (Dostoevskij and Geier, 2013, p.3). 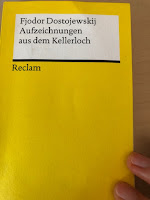 I consider using autoethnography for my research, but I would still agree with earlier generations of ethnographers who emphasized the distinction between research and personal life. I am not aiming at producing "messy and vulnerable" texts (Denzin, 2006, p. 421) and for me I will not turn ethnography into a creative practice. I just consider the thoughts on my research process as relevant.

My study of visual arts in Berlin will focus on encounters which often don't happen at set times and places. I want to be able to analyze those by using authoethnography parallel to more conventional methods. I can reflect on different sources, like unofficial documents or interviews I conducted and I want to point at the importance of situating oneself as a researcher in a social setting.

Links for researchers dealing with the crisis or trying to get some good writing done:
- https://patthomson.net/
- https://www.virtualnotviral.com/
- http://www.raulpacheco.org/blog/