Why is not everyone hip and arty in Berlin?

Not everyone can be part of the intimate circle of Berlin's hip artist scene. That is the impression many have while exploring contemporary art in Germany's capital. But is Berlin's art scene as exclusionary as it seems or does it just present itself as such. What kind of evidence is there actually?

To establish networks is necessary for independent visual artist to form a personal brand and to be able to exhibit one's work. But is is easy for non-locals to access Berlin's art scene?
First, I want to clarify that with non-locals I don't mean specifically non-Germans but anyone who decided to come to Berlin as a creator and did not grow into this dynamic, ever-changing cultural landscape. Many networks for creative producers are formed during some kind of artistic education at one of Berlin's prestigious art schools or through residencies for example. As interviews from my previous research in this field have shown, it is hard to enter those networks as an outsider - especially coming from another country. However,  Berlin's artists seem to be open and supporting as multimedia artist Veronika Dräxler confirms who recently moved from Bavaria to Berlin. 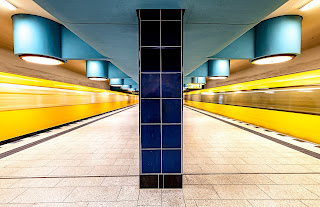 Of course, coming from another country makes it more difficult to find access. One reason is language, but this is just a minor issue, since in Berlin it is quite easy to get along with English or even Turkish or Kurdish (My studies focus on cultural dynamics between Istanbul and Berlin). A bigger problem is the fact that you can't be an insider if your always have to deal with being an outsider. How would you pay your rent, university fees etc. if you are unable to obtain a visa and how is it possible to mingle with any scene and be productive as an artist if your mind is busy with bureaucracy and finance? Additionally being the 'Other' seems to be quite trendy in multicultural, diverse Berlin.

It is a vicious circle, in German: a 'Teufelskreis', as an artist with another nationality you seem to be rewarded for being different and dealing with your political, national or biological difference in your work pays off quite well. In the past many visual artists from Turkey exhibited at group shows in Berlin which carried titles like ‘Istanbul Next Wave’, relating a series of exhibitions taking place in Berlin between 2009 and 2010, ‘Fokus Istanbul’ (engl.: ‘Focus Istanbul’)  in 2005 or ‘Berlin. Istanbul. Vice. Versa’ in  2004 for example. Those exhibitions were criticized by participating artists and curators for stigmatizing the Turkish-German community (Wolbert 2011). Barabara Wolbert states, “exhibitions no ﻿longer depicted the Turks in Germany; they now represented them.” (Wolbert 2011: 17-18). Those exhibitions, curated by 'Germans' created a set of expectations towards the artists, a picture of how contemporary art from Turkey should look like in Berlin. The artists answered those expectations, first by taking part in the exhibition and then by criticizing how their works were framed.

Towards an artist who is speaking the German language and has already established oneself as an artist within the country before coming to Berlin, this framing does not apply. German artists don't have to deal with stereotyping but still it is hard to work in the capital because finding a studio or work space is not easy. This mirrors the tense housing market of the city, which also forced the closure of many smaller art spaces in the past, where one could make contacts. Veronika tells me that for her, the easiest way to meet other like-minded people was to join workshops and go to art spaces/bars where you can easily start a conversation. Therefore, if you put yourself out there and manage to handle German bureaucracy and the housing market, Berlin proves to be quite open to creative newcomers.