Istanbul: News from the neighborhood

Turkey has been in the news for announcing curfew on short notice and instrumentalizing the pandemic situation for political campaigning. But how do people deal with the situation in their everyday lives? I am in contact with friends who live there or who traveled home to their families although they reside in Berlin. This blog entry is going to be a personal one to give an impression of how people in their twenties and thirties perceive the current situation in the metropole.

Istanbul is vibrant, pulsating and crowded, but due to quarantine and partial curfew people rather stay at home if they don't have to go out.  Of course some still have to go to work, therefore public transportation is still used by some. However people over 65 and under 20 are forced to stay at home completely. Death numbers are quite low (Turkey: 2,706 compared to Germany: 5,877*) and although the Turkish Gouvernement takes a secular approach to face the crisis (e.g. by closing mosques and banning funerals for those who died because of the desease) Turkish citizens don't oppose those measurements.

Families and friends of mine seem to be quite careful too, they don't go running at the seaside anymore, they wear their masks and don't bother going out. Work is done remotely and like in Germany teaching is done online now. When a new curfew is coming and someone is lucky enough to have a balcony they buy meat to make a barbecue. Many are not that lucky to live in spacious apartments though. One of my friends lives in a small place and the owner of the house decided to do some construction work on the house. Every day they start to work early until late - it is hard to imagine what kind of feeling of being captured it creates when you have to withstand noise in your own four walls. 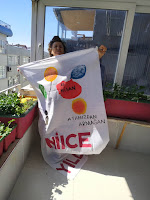 Last week it was the day of National Sovereignity and Children's day, a public holiday commemorating the foundation of the Great National Assembly of Turkey on 23rd of April 2020. Atatürk devoted the day to all children in the world. People usually celebrate the day and children have ceremonies at schools, sometimes they even gather in a stadium for making the day a festive event. This year the street of my friend united by clapping from their balconies and painting posters (see foto). 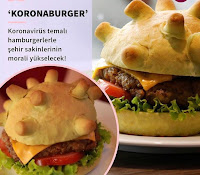 Another example for the handling of Covid-19 is the funny idea to make fast-food, which looks like the virus (see foto). For me the way  German media reports about the situation in Turkey seems to be often one-sided, emphasizing failing politics and I rarely see articles about situations of humanity and the effect the virus has on lifestyles. A burger in corona-form? I can not imagine many people here having enough humor to come up with something like that.

Artists struggle for survival - a statement

Without having any jobs in prospect, creative professionals don't have any expenses. Because of that many freelance artists do no have costs to cover at the time being and can not request money from governmental emergency aid fonds in most German federal states.

Instead many applications for financial support remain without an answer or artists are referred to ask for basic income. Artists who rely on themselves and pay many things from their own pocket, such as their rent for their home which is their working space at the same time, are not considered in governmental supporting programs during pandemics.

However every federal state decides by itself who is eligible to receive money. Berlin, Hamburg and North Rhine-Westphalia for example contributed to the payment of living expenses of artists, but the financial resources were exhausted in the beginning of April. Hamburg then set up a new aid program which guarantees freelancers and small companies an amount of at least 2,500 Euros emergency aid. Baden-Württemberg shows that there is another way to secure the existence of freelance creatives, there, artists get a fictitious wage of 1180 Euros. The conference of economic ministers now asked the government to take action and take care of supporting independent cultural work.

Luckily many artists are not only creative in their domain but in life in general and find ways to earn small amounts to secure themselves independently. Considering the symbolic value of any art form produced, which also gets us through these times, there should be a better support system for artists.
Eingestellt von Verena Niepel um 09:00 Keine Kommentare:

Why we all want to watch the 'Other'

Why do I find it interesting or relevant to do research on today's Turkish diaspora? In general, I am curious towards behavior of different human beings. When I imagine nowadays what I would like to do most, I think to myself how nice it would be to just sit in a café and watch people, to just "wander with no purpose". If you can't leave the house, what do you do to watch people? Just check out the rising numbers of people streaming disaster movies à la Roland Emmerich. Many are interested in watching how other people deal with catastrophes and strange situations. But there is also deeper level that motivates us to watch others or why I am a 'professional watcher', an ethnographer: to find out about ourselves. 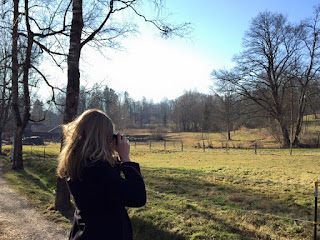 For perceiving the other as the 'Other' (with capital 'O' to mark that I am not supporting any form of 'othering' but somehow I have to use it to formulate my arguments), he or she has to be quite close to me. So close, that I understand this person as part of my environment. Only then, the stranger is strangely not so strange anymore. In psychoanalysis one identifies with the stranger as one's specular image, therefore the 'Other' becomes a mental surface for one's own projection (Rommelspacher 2002: 9).

Although the relation between oneself and the 'Other' is so intimate, the picture of the foreigner or the migrant often is quite stigmatized in Germany. Those exclusionary attitudes developed with xenophobic politics in Germany prior 2000 and prove to be quite persistent. No matter how many people support refugees and practice tolerance, there are strong discriminating voices and right-wing groups today, continuing the exclusionary politics from the late twentieth century. Back then, xenophobic debates led to a change of the basic law in 1992 through the conservative coalition of CDU/CSU (Christian Democratic Party/Christian Social Union) and FDP (Free Democratic Party). This limited opportunities for asylum seekers significantly (§26a German Asylum Law). Until today Germany has the lowest rate of giving citizenship to immigrants in Europe and a double citizenship is not available for most (ibid: 154).

Since today's media, society and - unfortunately to smaller extend - politics, try to raise attention towards the growing dangers of right-wing and nationalistic forces, the steps taken in 1992 seem shocking from a contemporary perspective. However, those exclusionary political structures did not change much. If one does not have the German citizenship, one is excluded from many freedoms for 'Germans', like the freedom of assembly or free choice of a profession (ibid: 160).

It is no surprise that it is hard to identify with 'German' structures for people with a different passport, since they don't even have equal basic rights. The pandemic will deepen those divides, because many Turkish-Germans don't receive the same support as 'legal' Germans do. The leftist news platform 'taz.gazete' tells about the case of a man who does not have the chance to choose his job freely and therefore I is forced to work "informally". As a result he does not receive governmental financial support in the pandemic (Paydaş 2020).

My initial question was, why I am interested in researching about the Turkish-German community. Well, one the one side I am just curious and on the other, I think it will teach me a lot about the society I live in and it's history and last but not least about myself.

Why we are all no migrants

Why we are all no migrants

Researching on migration became difficult, not only is regular fieldwork practically impossible but numbers of migration actually decreased to almost zero.

What happens if we are all stuck? We experience what it means to not move freely and not cross borders which were so comfortable to cross for european-passport holders. After 10th of April everyone who travels for touristic reasons has to go into quarantine for two weeks in Germany.
But most people do not question or critisize the german government for those regulations. If someone tells us that it is better for our own good not to move, we stay put.

The thing is, we are in the comfortable situation to accept those limitations, because most of us are able to satisfy their basic needs. Illegal refugees on the other hand have no access to health care in Germany. One needs to be registered, so that the foreigners office receives all the data. In case of emergency the responsible doctors will take care of passing on the data - of course many illegal immigrants avoid this scenario (Mediendienst Integration 2020). Not to mention the health-situation on the european borders, which is a human disaster.  This shows how unequal humans are treated because of their passports or missing governmental documents. Still, could this pandemie not be a chance to develop a little more empathy because we are actually all, more or less worldwide, sharing the experience of non-migration?

Usually research is the field to put on theoretical glasses and make assumptions about abstract relations. Could this abstract situation of forced non-migration not be a chance to put us all in the position of researchers and look at our environment from a different perspective? If the possibility of free movement is missing, the category of being a migrant disappears temporarily. What category is it then, that matters now?

What is home and foreign? Sometimes I wish now I would rather be somewhere else than at home to feel-at-home - to feel well. At the same time I think I should be exactly where I am, but it bothers me to have no other option. In a european society freedom is understood as a precondition for its existence, but this also indicates that there are spaces of abstract freedom which are assigned to members of this society. It is now, that we realize how easy it is to take those spaces away from us, which we took for granted.